Church of St. Michael the Archangel

The oldest information about the church in Isaiah village is found in documents of 1507. Preserved to this day wooden church was built in 1663 by master Ilya Pantelymon, that is noted (after Dragan) in a carved inscription on the west doorpost. It was restored in 1801 and 1875. In 1766, apostolic visitor noted that all three tops were triangular, and there was a separate throne above the nave. At the request of community, which intended to build a new church, project of a new wooden church was completed in 1928 by architect Yakiv Rudnytsky. In 1936, the construction of a new brick church in the neo-Ukrainian style began, designed by architect Yevhen Nagirny, and completed in 1938.

Both churches are located on a hill in the middle of the village by the road. The wooden church is an architectural monument of national importance, standing closer to the edge of the hill. It is the only wooden church in Turka region that has preserved its original beauty. The building belongs to single now specimens with choirs. It consists of a square nave, a faceted altar and a rectangular nave. The walls above the carcass and octagons, roofs, ledges and domes are covered with shingles. Baroque four-tiered, carved and gilded iconostasis of ordinary construction date from 1669.

All volumes are completed with octagonal tops (above the nave with one bend), topped by onion-shaped domes with small lanterns and tops. Above the nave on the second tier there is an emporium with open arcade-gallery. The church is encircled by a wide ledge, leaning on the protrusions of log crowns, that pass into carcass on carved pillars around the nave. Now the space in front of the nave has been turned into a closed porch.

To the south of the old church is a wooden bell tower, built in 1722, as recorded in a carved inscription on the north gate. It used to be the gateway to the churchyard. The belfry is covered with an octagonal shingle path. 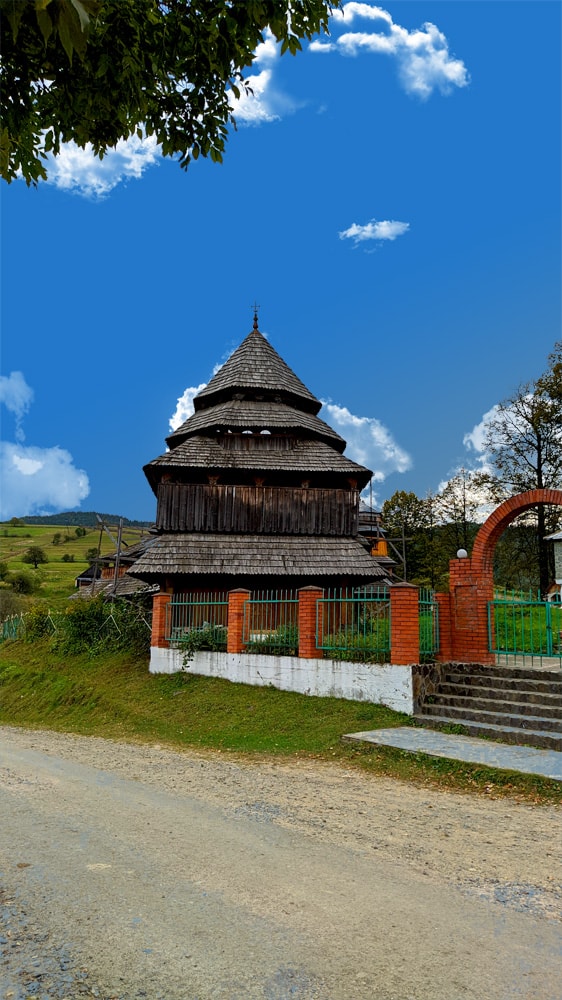